Incubation, A Western Form Of Meditation 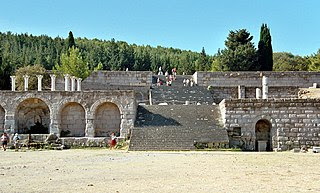 The forgetfulness regarding Western roots is mirrored in the way occidental seekers focus obsessively on spiritual practices and doctrines of the East, bypassing the tremendous healing power of techniques which were taught and cultivated in mystical traditions of the Ancient Greece.

One of these practices is incubation (enkoímesis), which used to be central in the Asclepian medicine, practiced in Dream Temples or Asclepieiai, of which archaeologists have found different types in Greece, Turkey and Spain. These temples had terraces with columns and altars as well as underground galleries and chambers with sleeping rooms, couches and medicinal pools carved on the rocks.

Men and women –particularly those in a desperate condition, affected by terminal illnesses– went to dream temples looking for healing, as a last resort. And there they were guided by the iatromantei, healer priests of Apollo –as Parmenides of Elea. The patients would purify their bodies and lie down on a couch. For hours or even days the patients had to rest in silence and stillness, surrendering to the healing power of naked consciousness, waiting for the light out of darkness, and under the strict supervision of expert healers, who also interpreted their psychological states and dreams.

In his book Asklepios: Archetypal Image of the Physician's Existence, Carl Kerenyi gives us a good account, in regard to the Asclepeion of Kos: The patient himself was offered an opportunity to bring about the cure whose elements he bore within himself. To this end an environment was created which, as in modern spas and health resorts, was as far as possible removed from the disturbing and unhealthful elements of the outside world. The religious atmosphere also helped man's innermost depths to accomplish their curative potentialities.

Ancient chronicles tell us about miraculous healings, as well as inner states experienced by the patients. The descriptions range from deliriums to special dreams and insightful states with mystic and shamanic characteristics well known in all spiritual traditions.

Incubation allows the seeker to stripe away all the layers of perception, accessing deeper dimensions of being.

This art turns out to be extremely effective for bringing poise into the psyche and the body, finding the source of well-being and natural healing.

The only thing required is to lie down comfortably, preferably in a dark place, and pay relaxed attention to the sensation of the body, including the breath, the heartbeat and the silence within, without trying to control thoughts nor emotions, and yet keeping an open mind and longing heart for the cure of the waters of the Mother Soul.

A systematic attention to heart and different limbs help to stop the wanderings of the mind. Mental contents simply become clouds dissolving in the space of pure awareness.

There exists a clear similarity between Oriental and Western techniques of meditation. Incubation in particular is very close to relaxation in savasana, one of Hatha Yoga poses, where pure consciousness is accessed gradually, through body sensation and finally moving further, as in the technique called Yoga Nidra or Yoguic Sleep.

Its ultimate goal is known in Vedanta as Turiya, or Fourth state, which integrates and transcends three states: waking vigil (jagrat), sleep with dreams (swamana) and dreamless sleep (shushupti).

There have been giants of Spirit who plunged into the greatest depths of reality , sometimes after terrible sufferings, as it happened to the Spanish mystic St.John of the Cross, author of The Dark Night Of The Soul, and subject of our next post.

Fernando Enarmonía
Be the Light of the Kosmos. Se la Luz del Kosmos.